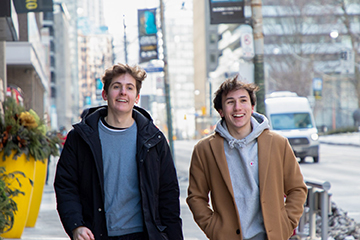 As the COVID-19 pandemic continues it is becoming more and more important to support local artists.

This is what Ryerson University second-year film students Max Mezo and Charlie Hill recently did with band The Neighbourhood Watch.

“The Neighbourhood Watch came up on his (Hill’s) Spotify,” explained Mezo. “We realized they were a local band. We reached out to them, told them we’re interested in shooting a music video.”

The band members were up for the project, and so was created The Neighbourhood Watch’s 20 Year Dream music video.

The video films numerous Toronto residents through the windows of their homes while the band plays its song.

“We asked them to gaze out silently for a moment or so, and then to dance along to the music,” said Hill in a note sent to Beach Metro News.“It allowed us to work safely around COVID-9 restrictions, but we also wanted to show how music has the power to spread joy and form connections even in difficult times.”

Band members in their own windows are also seen singing.

“We wanted the video to be fun, but in the edit we realized there was also something truly poignant about the glimpses of Toronto people living in lockdown at a time when the city’s vibrant live music scene is in enforced hibernation. Max and I were so touched by how many people agreed to help out a couple of strangers with a camera and we feel this really says something incredibly positive about the community spirit of people in the city.”

A resident of Coxwell Avenue and Gerrard Street East area, Mezo said he always had a camera in his hand when he was a kid. He never saw himself as a filmmaker, but more as an athlete.

In his junior year of high school, he said he realized he was not going to become a professional athlete so he thought about what things he liked to do and how much he was interested in the film industry.

He said the idea for 20 Year Dream was inspired by Japanese photographer Shizuka Yokomizo and her project, Dear Stranger.

“She printed out flyers and delivered them to houses, and it said that she is a photographer doing a project and if you are interested in participating, stand at your window at this time, and these really powerful images came out of these people standing out their window” said Mezo.

Mezo and Hill printed 200 flyers and delivered them to houses, but only got one response after two days. They then decided to post in community Facebook groups and received an overwhelming amount of responses.

“There were so many people we couldn’t use everybody. We couldn’t get to them all,” said Mezo. “After people responded, we plotted their addresses on a map and we figured the best way to go house to house.”

They filmed 15 houses a night for four nights.

Their video has been getting lots of attention on social media.

Mezo said they weren’t expecting so many people to see their video, but added he is happy people are fond of the idea and that their video brings positive feelings to people’s lives.

“Charlie and I are very happy with how the project turned out. The reception is exactly what we wanted: community, positivity and coming together.”

They hope to continue filming more videos in the future.