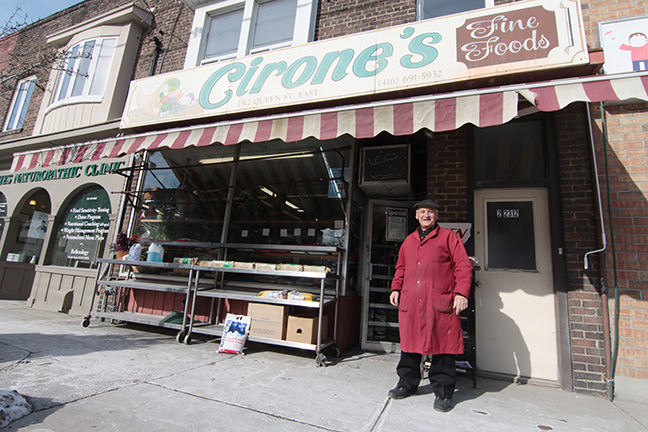 Known as The King of Queen Street and the Mayor of Balmy Beach, longtime Beach resident and business owner Joe Cirone passed away on Feb. 26 at the age of 81.

He ran Cirone’s Fine Foods grocery, convenience store and garden centre on Queen Street East in the community for more than 50 years, before retiring in 2015 due to Alzheimer’s.

He started the business in 1965, shortly after he and his wife Grace were married.

The store was truly a family affair with Grace and their children Mike, Angela, Frank and Julie all having worked there.

“Joe kept the store going seven-days a week up until he was 75,” said Angela in a note to Beach Metro News. “Everyone in the Beaches knew him and looked for his bright red apron.”

She said he was always available to help customers with their questions and gardening needs.

“Need help with deciding what plants to grow and how to take care of them? Joe was there at his Garden Centre every spring until pumpkin season in October. At Christmas time, he sold tons of Christmas trees.”

Joe was also deeply involved in the community.

“He did everything,” said Domagala. “He really did personify the Beach. He was always there at events wearing his red coat.”

Joe was also on the organizing committee for the first Easter Parade in the Beach, and was featured in an ad campaign by the Beaches Business Association in which his photo was on a bus shelter.

“An active participant in the area, he always took a keen interest in what was goes on in the area, always trying to improve things,” said Angela. “If not for the Alzheimer’s he would still be running the store with love and devotion to the community.”

“He would help people out every way he could. If he knew someone had had some trouble, he was always there for them. I called him the Mayor of Balmy Beach.”

Joe loved Canada and living in the Beach, Domagala said.

Growing up in the area of Modugno, Italy, Joe had early experience in the food business. His father ran a wholesale store, and local farmers would bring in their cherries, walnuts, olives and olive oil to sell.

In a 2014 Beach Metro News story, Joe said he remembered his father hiring people to crack the walnuts by hand and also seeing his future father-in-law deliver barrels of olive oil on a huge cart pulled by three horses.

Joe came to Canada in 1956 as a teenager with his brother Dominic, and they moved in with their father who was living in an apartment in the Upper Beach. Joe soon got a job painting cars, something he had also done in Italy, and then another job at a car wash on Danforth Avenue.

“We made do,” he said in the 2014 story, adding that on days off they sometimes fished near the docks at Leslie Street and sold baskets of smelts to their neighbours for a few dollars.

They also picked dandelions along the railway tracks north of Gerrard. “We cooked them,” Joe said. “Hey, Vitamin C! Even back home we did that.”

Eventually, Joe got a job as a mover with Tippet-Richardson and finished his Grade 13 in night school.

The daughter of the man who used to deliver the barrels of olive oil in Madugno had also moved to Toronto, and Joe met up again with Grace.

After they were married they lived above the store on Queen Street East, but eventually their family became too large for the apartment and they moved to a house in Scarborough. Joe said in the 2014 story that he always loved the view from the rooms above the store as it looked straight south down Munro Park Avenue to the lake. “I look at the lake and say, ‘Hey where’s God? Walking on the water.’ I say my prayers there, and He listens.”

Angela said her father is now “forever in his happy place at the store in the sky looking over his people in the Beaches.”

Joe is remembered by his wife Grace of 56 years; his kids Mike (Oriana), Angela (Joe /John) Frank (Susie) and Julie (Peter) and his nine grandchildren and great grandchild. He is also missed by his brothers and sister and the many nephews and nieces.

Angela said messages of sympathy have been pouring in from many of his old customers and staff from as far back as 50 years to new friends that met him at the store right before closing.

“The family wants to let everyone know that they really appreciate the messages and are very touched by all the love for their dad and by how many lives he touched in The Beaches.”

Due to COVID-19 restrictions, a private visitation and funeral are being held for Joe Cirone on March 4.