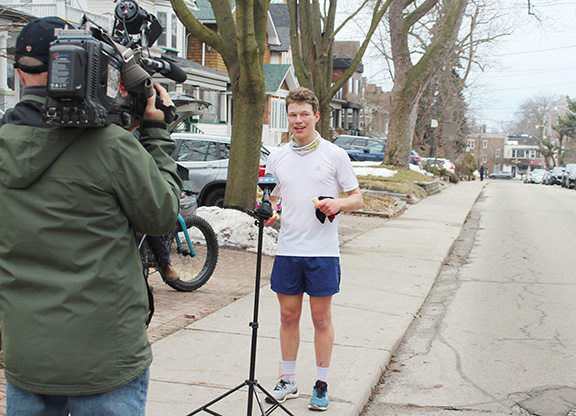 Ethan Peters is interviewed by CTV news on Sunday, Feb. 28, afternoon during a quick break on Hambly Avenue. Peters ran the hills of the Beach between Queen Street East and Kingston Road to raise funds for CAMH. Photo by Alan Shackleton.

Ethan Peters’ Hills for Health fundraising run in support of the Centre for Addiction and Mental Health (CAMH) was a huge success.

Peters completed the 111-kilometre run up and down the streets between Kingston Road and Queen Street East in the Beach on Sunday, Feb. 28. Starting at 4 a.m., he did close to 10-and-a-half-hours of running, finishing just after 2:30 p.m.

He said he got tremendous support from the community along the way.

“It was spectacular. I was completely blown away. On Scarborough Road, about five or six houses on both sides were cheering, smashing pots,” said Peters who lives on Hambly Avenue in the Beach.

“Every time I’d come down to Queen Street, people were cheering me on. Some family members walked down and along the hills. They cheered me on from the corners.”

Peters said he woke up at about 2:30 a.m. and he had a big bowl of oatmeal. He had three portions of every meal the week before his run (three breakfasts, three lunches, three dinners). While stacking up, he burnt all the calories during his run.

One of the main things he had on his run to keep him energized was chips, pretzels, bananas and oranges.

“I had Clif Bloks. I also had this endurance candy called ‘Stingers’. Those are my “pick me ups”, my “something that tastes delicious” or “I need some caffeine,” he explained.

“It’s still growing. When I went to bed on Saturday night, I woke up five hours later and I raised an additional $2,000. It was getting more publicity, people were interested in it. The day of the run, more people followed me on Instagram and liked me on Facebook. I knew this would happen, but I didn’t it was going to be (this big).”

Peters said he doesn’t plan on running again until at least until Wednesday or Thursday of this week, and won’t run at his normal speed for the next week and a half.

He said the recovery after running 111 kilometres of more than 10 hours consists of lots of sleep and rest.

“The last two times I’ve gotten sick after because your immune system gets completely busted.  I’ve been eating really well, drinking lots of water, washing my hands a lot. That is something I have to be careful about, especially with COVID-19.”

Peters is thankful for all the support from the family and the community.

“The energy that I felt yesterday (Feb. 28) was spectacular. It was not running 111,000 kilometres. It was about mental health, bringing awareness to mental health and raising money for mental health. Feeling the support and love from everyone who came out, smiled, banged their pots and even opened their door for two seconds. The simplicity of their actions bring joy to mind and motivate me to go faster.”

He plans to close his GoFundMe page on Sunday, March 7.

Donations to CAMH can still be made at any time.

Those wanting to donate to his GoFundMe campaign can do so at https://www.gofundme.com/f/hills-for-health