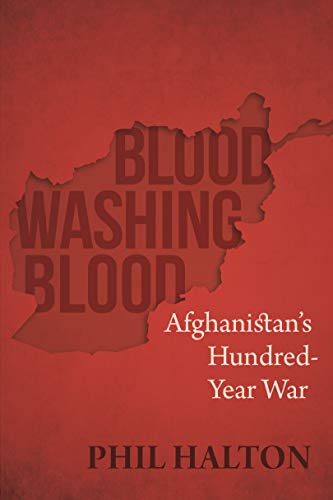 Much has been said and written about the conflict in Afghanistan, yet it seems to be a topic of confusion in the western world.

Much of the modern world is familiar with a sensationalised version of Afghanistan, one that is riddled with violence and terror. Violence does exist, yes but so does within that map a country with a populace that deserves authentic, non-tabloid-style representation.

“This book had been germinating for a long while. It really stems from my experiences working in Afghanistan off and on for a period of about a decade where I generally realised that there was a common lack of understanding about what the conflict in Afghanistan was actually about,” said Halton.

Halton, who previously worked in the Canadian military, spent time on and off in Afghanistan from 2003 to 2010 working in security for humanitarian agencies.

He wrote about his experiences in his first novel This Shall be a House of Peace.

With Blood Washing Blood, he draws on his experiences and research with the aim to familiarise reader with the history of a country in conflict.

“Blood Washing Blood is a non-fiction book that really looks at the history and deeper, and looks at the war in Afghanistan as primarily a social conflict as opposed to a military one or a political one.“ said Halton.

In the book, he presents a narrative that contradicts the popular one: “Despite the fact that Canada had troops there for a number of years and America still has troops there, it’s not actually about us, western countries and our desires,” said Halton. “It is very much an internal dispute about things that don’t really matter to the western government but are very important issues for the Afghan people.”

The book is set to be launched virtually on April 28. Along with the book launch, the virtual event will host an Afghani poet and screen a short film focused on the cultural facets of Afghanistan.

The book can be purchased at https://www.amazon.ca/Blood-Washing-Afghanistans-Hundred-Year-War-ebook/dp/B07YCB5HR4