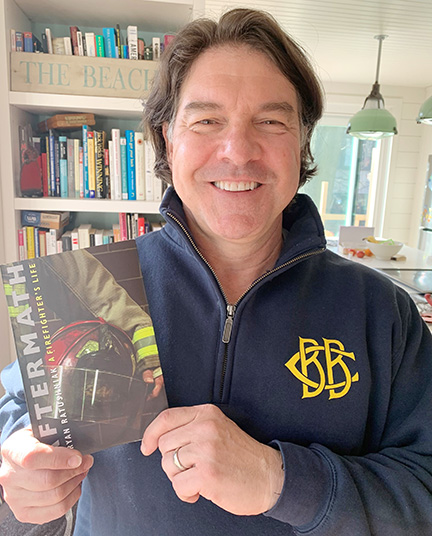 Beach resident Bryan Ratushniak has written a book about his experiences as a Toronto firefighter titled Aftermath: A Firefighter's Life. Photo: Submitted.

Being a firefighter comes with its positives: You are helping your community and/or city, you are often seen as a hero and mostly you love your job. However, it also has its downfalls.

Some of those include have dealing with the deaths of people in fires and accidents, having near-death experiences and Post-Traumatic Stress Disorder (PTSD).

Former firefighter and Beach resident Bryan Ratushniak has dealt with the highs and the lows of the job, and writes about them in his recently released book Aftermath: A Firefighter’s Life.

“I started writing the funny stories and I noticed when I compiled them, the ones I told at parties or dinners were the good ones, the funny ones,” said Ratushniak. “It wasn’t until I was really getting into it that some of the good stories were triggering stories about the bad situations.”

Some of the funny stories include when he was on a call in the Regent Park area about a little boy trapped in an enclosed space. He said such calls can often end badly, and are traumatic experiences.

Ratushniak said when they arrived at the intersection at Parliament and Winchester streets, there was a boy waving his arms in the air.

“There was a little boy, about eight years old. He was asking ‘Is my brother going to die?’ We asked ‘Where is your brother?’ and we could hear a pounding. (His brother) snuck into the newspaper box,” Ratushniak said, while chuckling.

“He snuck in to steal the money in the box. He was asking ‘Am I going to jail?’ We told him he won’t.”

Like many others first responders, Ratushniak has PTSD as the job takes a huge toll on both physical and mental health.

“I had a fire at Dundas and Broadview. We went up in the attic to do a search. I got lost in the smoke and I fell down the hole and I was trapped. I closed my eyes and I was going to let my air run out,” he said. “The kids were going to get a bigger buyout if I died on the job. Luckily, my co-worker pulled me out of the hole and I was out for several months with a back injury.”

After this event, he went to Toronto’s Centre for Addiction and Mental Health (CAMH) and was diagnosed with clinical depression.

He said it was not talked about enough among his fellow firefighters.

“Being a firefighter meant you’re a macho man. And you need to suck it up because you’re not supposed to feel that. You drink so you don’t feel that pain. The reality is, everyone goes through it and that’s OK,” said Ratushniak.

He added that attitude of not discussing mental health issues has changed, and the reality of PTSD is now talked about

“The fire department is so much better now. When I came on the job and I had a traumatic event, there was no debriefing team. I drank so I would fall asleep and get rid of that bad day. Maybe tomorrow is better. If tomorrow is also bad, I’d drink again. That was my motivation.” he said.

Ratushniak retired four years ago, and it wasn’t until two years ago that he stopped having nightmares.

He said CAMH and initiatives such as Bell Let’s Talk help people to speak out and talk about how they are feeling without any stigma.

“It’s only when people start saying ‘I’m struggling’ that you realize how extensive the problem is,” said Ratushniak.

Today he is working in the film industry, which is what inspired him to start writing and led to his book.

He said that during the times he was not getting calls for auditions, he wrote a video for kids called Lots and Lots of Firetrucks, and wrote a documentary on the Great Fire of 1904 in Toronto called Iron Men, Wooden Ladders.

One thing he misses most about being a firefighter is the crews and the people he worked with, as well as the adrenaline rush of battling a fire.

His book Aftermath: A Firefighter’s Life is available at Indigo or Chapters and can be purchased online at https://www.chapters.indigo.ca/en-ca/books/aftermath-a-firefighters-life/9781770865761-item.html