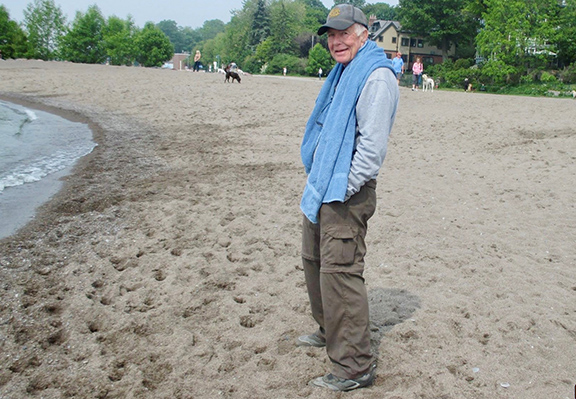 A proud Beacher with a long history in the community Robert (Bob) Acton passed away on March 26 at the age of 86. Photo: Submitted.

Bob is survived by his wife Elayne, and his children Robert (Andrea) and LeeAnn, and beloved granddaughter, Audrey Jude.

He played football for the Balmy Beach Club, which was the farm team for the Toronto Argos of the Canadian Football League in the 1950s, and was drafted by the Argos, and then traded to the Ottawa Roughriders.

After his football career ended, Bob worked for the City of Toronto as a draftsman before forging a path as a business executive in the construction industry where he served as President for Canadian Patent Scaffolding for more than 25 years.

A sports fanatic, Bob was a member of the Balmy Beach Club and the Scarboro Golf and Country Club. He served on Scarboro’s Captain’s Committee and the Board of Directors, serving as the President in the early 1990s.

The tall tales of all the rounds of golf “Action Acton” had with his golfing cronies were as legendary as the club pours of Scotch they enjoyed on the veranda at the club after their rounds.

But the rounds he treasured the most were the ones walking up the 18th fairway beside his son, his namesake, Robert.

Bob and Elayne’s love story and marriage of 54 years was one filled with passion.

As Elayne fondly recalls “life with your Dad was never boring”, and how could it be? Talk about opposites attract – Dad was an Irish Protestant from the Beach who fell head over heels for Elayne, a Italian Catholic from West Hill. Who could have imagined a chance meeting on Ashland Avenue in 1965 would have created this love story for the ages,

Never one to back down from a challenge, Bob battled and beat cancer not once, not twice, but three times. Pancreatic cancer should have taken him in 1977, but his will to live to see his children grow up, and to keep his promise to grow old with Elayne was a testament that he forever beat the odds.

Coming out of the recovery room in 2003 after this last battle, his family was reminded again of his fighting spirit and his humour. He said he had “scored a hat-trick” against cancer.

Bob embodied the family motto of Carpe Diem. Always reminding his family and those around him to seize every moment life offered, whether it’s good or bad.

Whenever presented with a challenge or opportunity, he said, “No matter what, you play the hand that life deals you.”

Fondly remembered are all the Acton family road trips to Hilton Head Island in the minivan with Willy Nelson’s On the Road Again starting every voyage.

After 25 years vacationing on Hilton Head Island, Bob and Elayne’s next journey took them to Bobcaygeon with the purchase of a beautiful log home affectionately known as The River. Here they enjoyed retirement and 20 glorious years of cigars, sunsets and red wine overlooking Emily Creek.

The River brought Bob another one of his most treasured family members, his four-legged “boy”, Tank. For the 12 years the beloved chocolate lab was by Bob’s side, filling his life with wet kisses, sandy beaches and unconditional love. Tank was his pride and joy, and Bob loved nothing more than lighting up an hour-long Cuban cigar, loading Tank into the van, and walking along the Beach with his boy.

His family is comforted by knowing they are now reunited together, walking together along the Beach once again.

Bob will be missed by all his extended family of nieces and nephews, brothers and sisters in law as well as all the friends he made in his 86 year journey of living life to the fullest.

The Acton family has deep roots in the Beach, and Robert (Bob) was the uncle of the late Bob Acton after whom a park in the Upper Beach Estates is named.

The family wishes to express their heartfelt thanks and gratitude to the caring and compassionate staff at Chester Village and Michael Garron Hospital.

Cremation has taken place, and a celebration of Bob’s life will be held at a later date.