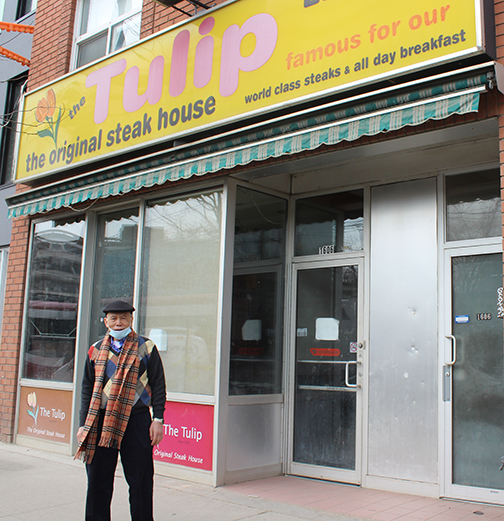 David Lui, the owner of the legendary The Tulip steakhouse on Queen Street East near Coxwell Avenue, says he is a good landlord and wants to clear his name regarding what led to the closure of the business.

The issue has been gnawing at Lui, 79, for more than a year as he feels he was unfairly portrayed as being the person responsible for the much-loved restaurant’s closure which was announced with a sign on the door on Jan. 1, 2020.

Original reports of the closure said it was the result of a dispute between the landlord and the people running the restaurant. Many of these articles and the social media posts about them included long strings of comments from people taking “greedy landlords” to task for ruining the small business environment along Queen Street East.

While it is correct that an agreement could not be reached, Lui said that is not the whole story.

“These articles do not reflect all the facts that led to the sudden closure of The Tulip steakhouse after 32 years in business,” he said.

In an interview with Beach Metro News inside the empty Tulip in late March, a still obviously upset Lui shared his reasons for wanting to talk after staying relatively silent on the matter for more than a year.

“Everyone blamed me. I am made the bad guy,” he said. “Everyone called me a heartless landlord. For days I could not sleep. I just want to clear my name.”

Making the entire issue so much more complicated and emotional for Lui is that the tenant and operator of The Tulip since 2008 were his son and his son’s wife.

It all began when Lui’s wife Sheila Ann Webber passsed away in 2006. Lui became lonely by himself in 2008 and because of his age and health, he decided to retire from the restaurant.

Wanting to keep the business in the family because it was a profitable business, he talked to his son and his son’s wife and came to an agreement that they would run the restaurant and he would charge them rent for the space in the building at 1606 Queen St. E. which he owns.

That all seemed to go well for many years but then in 2019 it started to fall apart, said Lui.

Lui stressed that when he handed over the business in 2008 it was profitable and the rent was reasonable. “The whole city was grumbling about the closure and about the high rent but it was at market standard according to an appraisal and it was reasonable,” Lui added.

As Lui sat in The Tulip in March, his pride in the business and how he and his wife had seen it grow since they took it over back in 1988 was clear.

“Every day the business really improved and we had the name for steaks. People were lining up by 1993, and we had all these prizes from different media. I was interviewed on TV and we were named one of the top five steakhouses in the city.”

That recognition put The Tulip into the same league as what were then some of Toronto’s iconic downtown steakhouses such as Barberian’s, Carmen’s, Hy’s and Bardi’s. The Tulip had signed photos of celebrities on the wall saying how much they loved the restaurant.

The atmosphere at the Tulip was always relaxed and accessible, it was located in a neighbourhood with some character and grit given its proximity to the then Greenwood Racetrack, and it was open for breakfast.

“The big difference was we were a steakhouse that also served breakfast. Anybody can make eggs, but I had a special way of making home fries. People loved them,” said Lui.

The Tulip has a long history in the East Toronto area that predates Lui and his wife’s ownership of the restaurant.

It was first opened back in 1929 by the Diamond family on Danforth Avenue before later moving down to 1610 Queen St. E. That first restaurant on Queen was a couple doors east of where the current Tulip is located.

“It was 50 seats with no basement,” remembered Lui.

Lui said the Diamond family was very helpful in making the ownership transition at the time.

“Mr. Diamond would come in and help me. He knew my background and would take me to slaughter houses and taught me how to inspect and pick the best meat,” he said. Lui already had extensive experience in the restaurant and food business having worked as a chef at a country club for 16 years, at a “semi-French” restaurant in the Yonge Street and Eglinton Avenue area, and Hy’s Steakhouse downtown so he was familiar with the demands of fine dining. He also studied cooking at George Brown College.

On March 28, 2000, he and his wife celebrated the opening of their new bigger version of The Tulip at 1606 Queen St. E., just two doors to the west of the original. Lui had full input in the design of the new restaurant. It was built to his specifications and included numerous full kitchen set ups, including one in the large basement to serve a party room, which he was still proud to point out more than 20 years later.

“We sold good quality meat at a fair price and that was always how we did it. I worked in the kitchen and was head cook all those years. My wife looked after everything else including the cream pies, the cheese cake and the chocolate cake,” he remembered with a smile.

Twelve years ago it was a busy restaurant and now it is an empty restaurant. As for the future of The Tulip and the building it is in, Lui said he was not sure what would happen next.

Beyond that is a story of agreements and disagreements as the business and family relationship seemed to deteriorate. Who is in the right or in the wrong is in the eye of beholder, but what upsets Lui is the closure of The Tulip, the relationship he now has with his son and the perception that the restaurant closed because he was a greedy landlord.